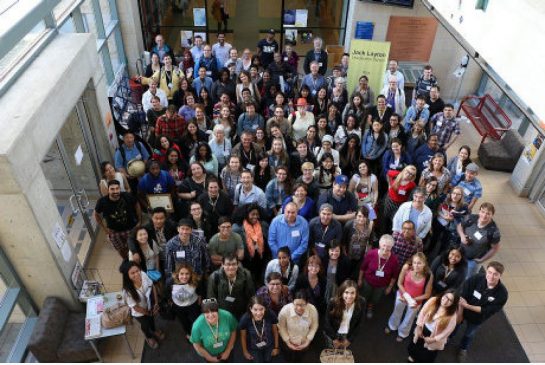 I went to Ryerson University on Sunday morning to see what Olivia Chow is up to.

There she was in her trademark yellow, standing at the front of a busy auditorium, teaching the guts and brains of activism.

If she can no longer change the country as a New Democrat MP, and couldn’t change the city by winning election as our mayor, then she’ll do the next best thing: teach others how to do it themselves.

This is a five-day program, gleaned mostly from the teachings of Marshall Ganz — the civil rights activist and United Farm Workers organizer who became famous seven years ago as the man behind Barack Obama’s 2008 presidential campaign’s grassroots organizing and volunteer training program.

Ganz took everything he’d learned over decades of action and broke it down into a theory of social change and the practical techniques and skills needed to implement it. Chow spent three months earlier this year taking one of Ganz’s Harvard University courses, long-distance. Even she, after more than 35 years of activism and political organizing, learned things.

“At the core of it is building relationships,” she explained. “It’s not asking ‘what is the issue?’ It’s asking ‘who are the people?’ If you look at education, the best practices are child-centred, and in medicine they’re patient-centred. Why should we be any different as organizers?”

Once she got hired part-time by Ryerson, she trained 15 people — many of whom worked on her mayoral campaign — to facilitate workshops for her class as teaching assistants.

With very modest advertising — just signs and word of mouth — some 250 applied for the course, so many that the university opened a second session in July.

“What it’s definitely proven is there is a huge interest in acquiring skills for making change,” said Myer Siemiatycki, politics professor and Ryerson’s first Jack Layton Chair, who came up with the idea for the class. “Jack would like that a lot.”

The auditorium on Sunday was packed with both young students new to activism and weathered protesters who should have turned cynical long ago. They were working on indigenous student rights and homeless shelter policies for transgender people and seemingly everything in between. I spoke to eight of them. Each was an advertisement for youthful enthusiasm. They glowed with excitement.

“I didn’t realize how much potential I have,” said Yasmin Virani, a 20-year-old criminology student who is lobbying Sunnybrook to expand its veterans program. “I can make a change.”

“Oh my gosh, I love her,” said Eric Rogers, when I asked him how Chow was as a teacher. “She has so much personal expertise. She humanizes politics.”

I asked each of them what big lesson they learned from the course. Here’s what a few said:

“You have to nurture relationships,” said Gord Jackson, a 75-year-old anti-poverty activist from Hamilton. “You aren’t the only bright light in the room.”

“Someone has to lead, but there should be no fewer than three people ready to take your spot,” he told me. “It’s a long hard process to make change. If I burn out, there are others who have been trained and are ready.”

(The 60-page course manual calls the training of volunteers the “ladder of engagement,” with concrete steps from supporter to volunteer to team member and organizer. For instance, every new would-be volunteer should be contacted within 48 hours “because prospects are more likely to say yes.”)

Rahat Hossain, 22, learned change is driven not by ideology but by personal stories. The soon-to-be-medical student has been an anti-poverty advocate for many years. But the course was the first time he told the story about how his mom often didn’t eat when he was a child because the family was broke.

“Yesterday someone else told me they had a similar story. I’m realizing how systemic and common it is. It’s not about this elaborate platform or fundraising or about even the big picture. It’s about building relationships by having conversations.”

Chang and the rest of Chow’s group have formed a budding non-profit called Project Organize. They are planning on taking their program around Ontario, just as a group has done in British Columbia. Already they’ve trained a few other local non-profit groups, including the Social Planning Network of Ontario and rabble.ca.

I’ve booked them to come and train me and my fellow board members of our east-end residents association.

The business world has long codified and taught best business management and marketing practices. It’s about time we activists did it!

Catherine Porter can be reached at cporter@thestar.ca

This Is A Custom Widget

This Sliding Bar can be switched on or off in theme options, and can take any widget you throw at it or even fill it with your custom HTML Code. Its perfect for grabbing the attention of your viewers. Choose between 1, 2, 3 or 4 columns, set the background color, widget divider color, activate transparency, a top border or fully disable it on desktop and mobile.

This Is A Custom Widget

This Sliding Bar can be switched on or off in theme options, and can take any widget you throw at it or even fill it with your custom HTML Code. Its perfect for grabbing the attention of your viewers. Choose between 1, 2, 3 or 4 columns, set the background color, widget divider color, activate transparency, a top border or fully disable it on desktop and mobile.
Go to Top